The story of Tharparkar, the desert situated in south of Sindh got in the news when babies were reported dying in hospitals and having severe malnutrition.  Of course there were lot of debates held all over the country including in Islamabad, where the so called specialists including the donors gathered in 5 star hotels and talked, sympathized and then criticized the government followed by a sumptuous lunch and went back home or to their work.. so the story reached from Thar to Islamabad.

BUT, this a different story of a person who had lived over there and has passed through different phases of life and profession and has landed up in Islamabad. This is a story of frustrations, progress, sacrifice and a continuous struggle to achieve and contribute something to make a difference in his life and lives of so many people. This however, is not meant to praise someone or even sympathize with him, but to learn and pick up some of the lessons.

It all started when his parents migrated after partition of India in 1948, when his family came to settle in a place called “Dhoronaro”, a sindhi word meaning white river and it was so true.  A small village connected by road as well as railway line to the bigger city such as MirpurKhas, Hyderabad and Karachi; having a coal engine. The father was working in a cotton ginning factory supposed to be marking the cotton-bails with numbers. His father has to do this as his grandfather died at a very early age and since he could not get the education, he could only write English numericals and some alphabets. But, his father had other qualities, including the entrepreneurship, building business relations; he was made the manger of that factory within few years. The factory had the generator for running the machines and the only source of light for the factory workers who were living in that premises. However, his father was given a separate residence just few meters away from the factory, where there was no electricity and the family have to rely on the old method of ‘laltain’ or ‘petromax’–colloquially called “gola batti” and kerosine oil operated pedestal fans. He always used to think that though his father is supposed to be the “seth” colloquially used for the ‘boss’ or a relatively rich person, why we are not having the facility of electricity.  Here is what his house looked like; the lane is occupied by so many encroachments and in a way it is closed… so this is the beginning of a long journey…. join me if you are interested. 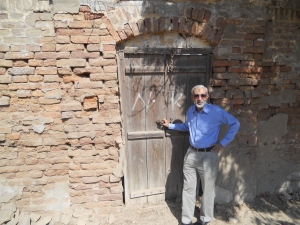